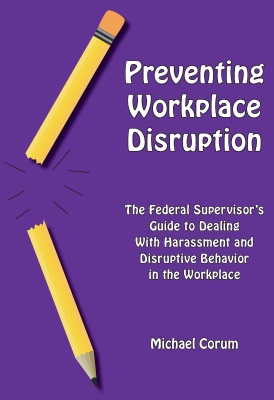 Federal supervisors are increasingly confronted with all manner of bullying behaviors in the workplace including simple unsettling acts, offensive behavior of all sorts, and harassment of all types to include discriminatory acts like sexual harassment; threats against coworkers, verbal abuse and threats against supervisors; and outright acts of workplace violence.

Michael Corum, is a leading authority on handling problem employees in federal service. This new guide replaces and expands upon Michael Corum’s popular books, Stopping Workplace Violence and Combating Sexual Harassment, by offering federal supervisors step-by-step prescriptive guidance on sorting through and identifying disruptive behaviors and taking the right practical and legal measures to resolve them. The book is broken into three sections: workplace threats and violence; harassment, discriminatory and other forms; and other disruptive behavior. The book covers:


This book provides federal managers and supervisors who are new to federal civil service an overview of the structure and dynamics of federal civil service. It includes the rights and responsibilities of the federal manager and how to exert their authority within the system. Also covered are the five phases of managing federal employees: job structuring, hiring, managing performance, maintaining discipline, and managing leave and attendance. And concludes with the issues of EEO and labor relations.(more details)


Ideal for federal supervisors and managers, and anyone who advises them, this handbook is a practical guide on misconduct, performance and discipline. Major topics include the fundamental elements of disciplinary and performance actions, removal procedures, the defense of a penalty, special challenges to adverse actions, and nontraditional disciplinary techniques. (more details)