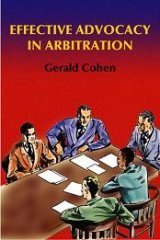 Gerald Cohen brings his experience as an arbitrator with over thirty years of practice in federal, state, and private sector labor arbitration to bear in a concise and informative treatise that is devoted to the technique and practice of arbitration. An excellent reference for experienced as well as novice advocates interested in instruction on:

Also available as a .pdf file on a CD-ROM or as an ebook for instant download.